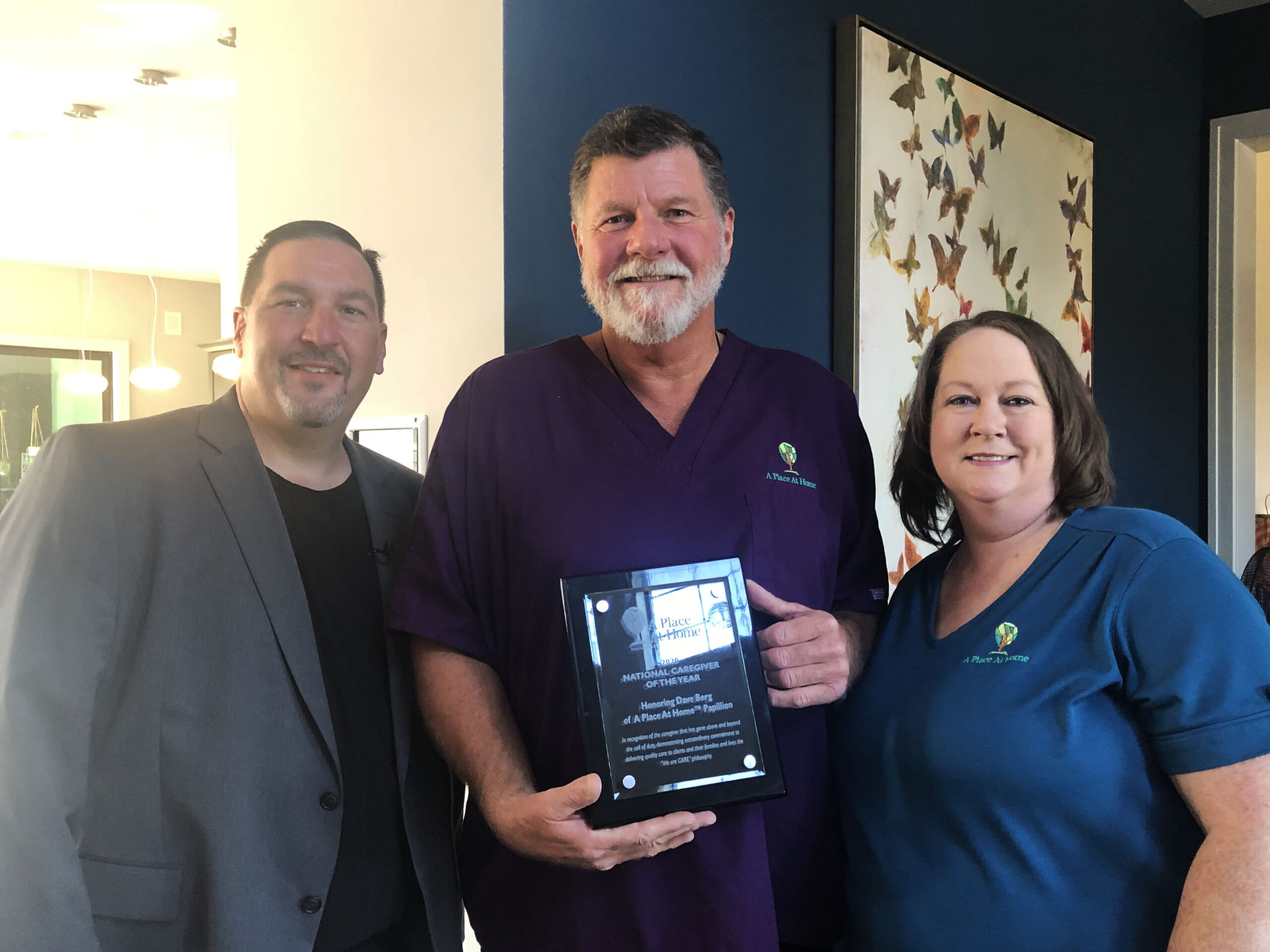 The 2020 Caregiver of the Year went the extra mile in providing exceptional care.

The 2nd Annual A Place At Home Franchise Convention was held in late September. This event marks a time for franchisees to connect, collaborate, and celebrate the past year. This year also marked the first-ever recognition of the National A Place At Home Caregiver of the Year. Franchisee’s submitted nominations from all over the country for one caregiver that went above and beyond the call of duty, demonstrating an extraordinary commitment to delivering quality care to clients and their families and lives the “We are CARE” philosophy.

“We received many nominations from all over the country and each one was inspiring. It was difficult to choose just one winner,” said Jerod Evanich, President and Co-Founder of A Place At Home.

However, there was one nomination that painted a detailed picture of how one person went above and beyond the call of duty. The nomination read:

“Dave came on with A Place At Home after decades of working in the insurance business. He wanted to do something more “rewarding” in his 60s. He got his CNA/CMA and began working to make people’s lives better.

Dave treats all clients like family. He creates a unique bond with each client he works with. He is always on time, never calls out, and makes sure everything is done to his best ability.

Dave has worked for the past year with a very high acuity client. He instantly bonded with the young client (49) who due to a rare set of circumstances went from a successful businessman to a barely communicative paraplegic overnight.

He has spent countless hours working as the main caregiver for this client and his family. Not only does he transport the client to his MANY weekly therapy appointments but works one on one with him in his home. Dave is consistently cheering this client on to make his next personal best in his daily bike exercises and always makes notes when a personal best has been reached.

Dave has worked with therapists at Madonna to learn this client’s individual therapies and continues them at home as well as trains other caregivers working there in how they can help him gain strides.

When he heard their anniversary was approaching, he took it upon himself to plan a romantic dinner out so the client could surprise his wife. He took the client out to get a card, made reservations at a nice restaurant, planned for a special dessert, and took time out of his off time to transport them over there in the client’s wheelchair van so they could surprise the wife.

Dave does everything he can to try to relieve some stress off the wife who is also a mother of four and a doctor. Life for her is crazy and Dave makes sure there is always one less thing for her to worry about in his care for the client. Dave’s level of commitment to not only the client but also to our company goes above and beyond anyone I have ever seen.”

Dave walked into A Place At Home – Papillion shortly after they opened their doors in 2019. Dave interviewed for a CNA position and said he was looking for something that would fill his heart. He had retired from insurance and was now searching to do something more meaningful with his time.

“I remember thinking where the heck did this guy fall out of the sky from?” said Rick Perkins, Owner of A Place At Home – Papillion.

Dave was placed with Don in August of 2019 and the two found an instant connection. They not only share common interests but are also from the same town and attended the same college. It was an unfortunate set of circumstances that brought these two together. But citing six degrees of separation,  Dave said, “There are no coincidences. I’m blessed to be a part of Don’s life.”

As blessed as Dave feels, Don and the A Place At Home team consider themselves equally fortunate to have Dave fulfilling his personal mission: to touch as many lives as possible as a caregiver.

Dave is firm in his belief that you must have a servant’s heart to work in this industry; you must have empathy, and be able to put yourself in someone else’s shoes. It’s this mindset that awarded Dave Caregiver of the Year. While he was happy to be awarded this honor, it’s his internal compass that drives his actions.

“At the end of the day, I lay my head on my pillow, and I know I made a difference.”

Equal Opportunity Employer ©2023 A Place At Home All franchise locations are independently owned and operated.